<MMSR (Mameunsori, or Resonance)> is the very first project of the curatorial collective Crypton. Mamensori, in Korean, refers to the resonance of sound that happens after the sound hits an obstacle. In Crypton’s interpretation, it also describes some erroneous moments; that we think we are communicating but in fact are not. Noticing some ocular- and hearing-centrism in the current arena of art exhibitions, Crypton aims to translate, replace, and supplement the visual and auditory senses – to communicate with a broader scope of audiences. With artist Minsu Oh and Inhwa Yeom’s artworks, in particular, Crypton also tackles some social boundaries that cannot be communicated through. With this, Crypton wishes to expand the boundaries of art, at its resonating intersection with both the technology and disability.

Technology of Sensibility,
Re-visiting the Hour Hand of Analog Watch

Digital technology confers an eternal life, upon transmitting various visual and auditory contents into 0 and 1. The digital, filed without the trace of time, seems only impeccable, thorough and complete. Paradoxically from such an environment where everything is digitally coded and deprived of death, it renders an optimal moment for discovering the analog, which in contrast, is scratchable and traceable.
A question arose at this point: would the development of technology be beneficial or be intoxicating to physical impairment?’ If someone at Tesla hears this question, they may ask back like: “why, are you a fool, or haven’t the autonomous driving cars or the IoT given you a clear enough answer just yet?” Admittedly, the technological development of daily industries certainly aim to encompass both the disabled and non-disabled people; efforts have been made to close the gap between them, with some results being achieved. But what about in the artworld? Or, should I rather ask: would the development of technology in contemporary art – which is rapidly changing, perhaps half a step faster than industrial technologies – be beneficial to physical disabilities? Would non-object based works – which nowadays even transform into metaverse and NFT – fully reach people with visual impairment, or DHH(deaf and hard of hearing)? Just recently, a newspaper article reported that a set of brand-new techniques have successfully reproduced some famous paintings in three dimensions, and was introduced for audiences with visual impairment. But, is the development of technology really making art something enjoyable – regardless of the audience’s disability?
... Crypton’s exhibition-making also started with this very question. Crypton – a curatorial collective doing research on accessibility, with their own methodology of cross-translating various senses – has come to ask now: Is the term “convergence”, which is to bind art and technology together, valid for everyone? Referring 'Crip (a slang overthrown by disability activist to include different types and degrees of disabilities)’ in their team name, Crypton invited Minsu Oh and Inhwa Yeom as their artists over to the MMSR, to ponder on their question at a contemporary media art scene.
Exploring the possibility of a subjectivity that machines can have in their relationship with humans, Minsu Oh presents <New Technology: Run⦁Start⦁Common⦁Neutral⦁Ground>(2022). The work reveals an overlay of senses among the voice of his father and the sound of mass media machines. In the work, the so-called zombie media (or, home appliances and industrial products that are no longer used, broken, or protruded in the surge of new tech products) are collected, controlled, and eliminated of their inevitable noise using insulation devices; and finally, remediated as sound art. The motor- or a clockwork-like sound in the work gently stimulates the desire to experience and explore a new analog – in this era where the analog is no longer read as the pre-digital. It also makes us realize anew the era of hybridity, constructed by the cross-reference and hyper-mediation among the digital and analog.
Inhwa Yeom’s <Chandra X>(3D Performative Apparatus-Environment, XR based on interoperable AR/VR, PC, projector, keyboard, mouse, video-installation) presents a state where a boundary between the intentional and unintentional visual-cognition becomes neutralized. Depicting a contemporary digital labor landscape, the work was devised to be mutated and completed by audiences. This is no surprising when considered that the artist has so far rooted her interest in (non)voluntary performances, that are performed at the Interstitialities between the virtual and reality; devices and audiences; performers and audiences. At a place built with XR technology, where web-based virtual reality and augmented reality interoperate, the audiences cross the reality; they connect, intervene, and exchange feedback with each other’s performative experiences in real time. Like a philosopher who draws the coordinates of humans in the time and space of the here and now; the artist presents to those who transcend disability and non-disability, her artistic imagination in an era when technology overwhelms our lives, and a zone beyond returning to the past through the future and meeting the future through the past.
Cognizant of the technological characteristics of remediation, the two artists utilize them, expose their fictitiousness, unfold their thoughts on technology in their works, and transform their works – into new beings with the potential of slowness. They reproduce how the analog, upon encountering the digital, can transform into a language that signifies a sensibility. They also prove how the substantiality/reality of something imperfect turns into a metaphor that conjures up sympathy, forming a field of physical interactions with flesh-rubbing experiences. This way, <New Technology: Run⦁Start⦁Common⦁Neutral⦁Ground> and <Chandra X> signify a more delicate and warm, human-centered values, rather than the digital mechanization of efficiency, convenience, and rapidity.
Standing at the imminent threat of modern science and technology, Martin Heidegger, German existentialist philosopher, published 「Thesis on Technology」 in 1937. Witnessing the formidable development of science and technology in the early 20th century, he believed that philosophers should not only think about metaphysical ideas; but also to understand the politics, economy, and culture of a particular era they live in. “Since the essence of technology is not technological at all, the essential awareness of and decisive confrontation with technology must occur in a realm that is closely related to the essence of technology on the one hand, and on the other, that is fundamentally different from it. And, such a realm is art.”
Throughout the first half of the 20th century, Heidegger emphasized that all beings, including humans, lost their unique existence and were reduced to mere computable and disposable energy aggregates. The only hopeful thing is that there are artists who try to achieve an essential awareness of technology beyond the instrumental regulation of technology, like the philosophers at the time who recognized the power of technology more than anyone else, struggling with the issue of how to deal with it.
For this reason, Crypton's aspiration, as states that "we hope that in the process binding different layers of art, technology, and disabilities, the voices and feedback will resonate with each other, and will in the end, reverberate, explode, and break down boundaries" not at all vain. ■ 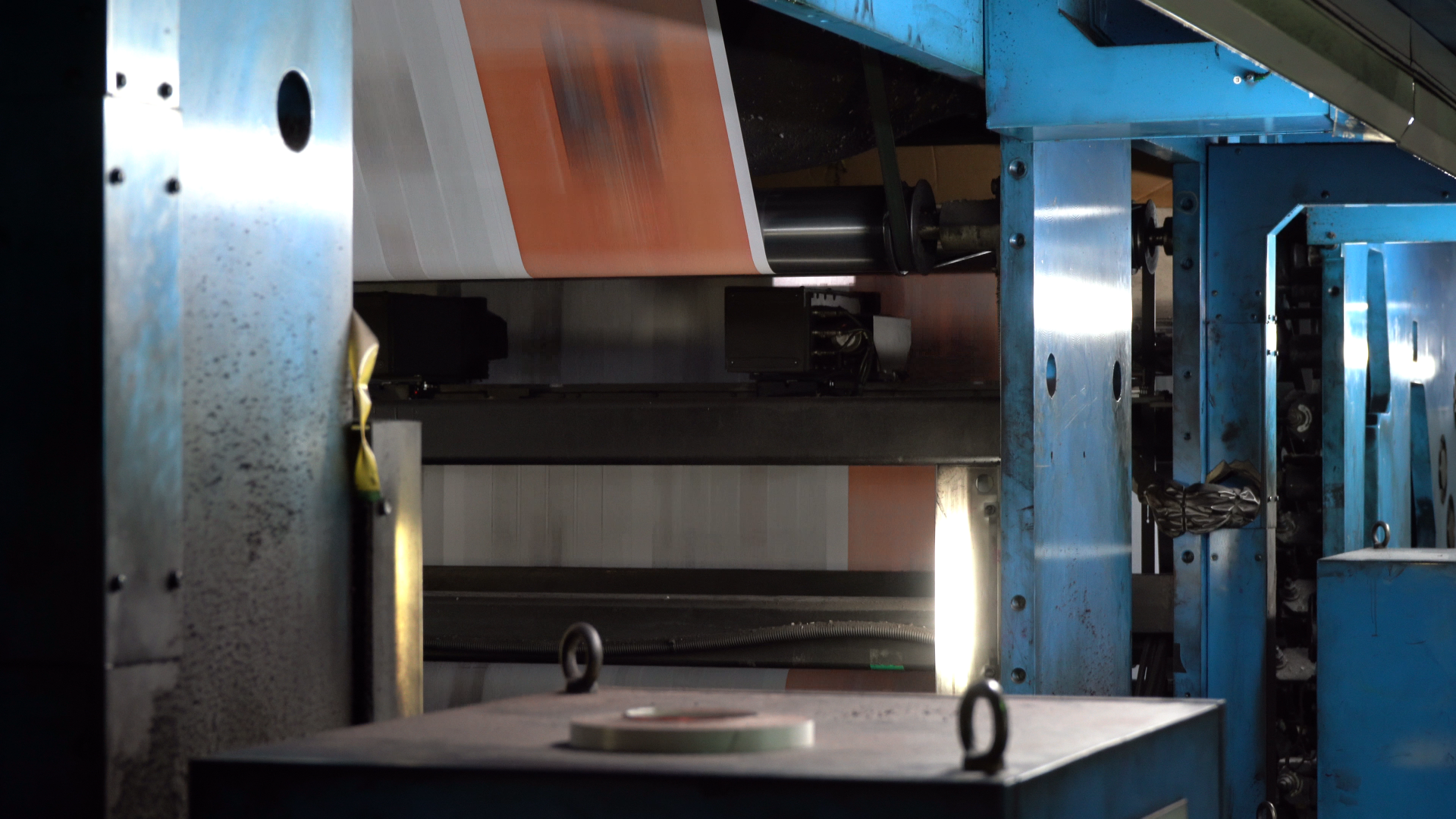 Exploring the possibility of a subjectivity that machines can have in their relationship with humans, Minsu Oh presents New Technology: Run⦁Start⦁Common⦁Neutral⦁Ground(2022). The work reveals an overlay of senses among the voice of his father and the sound of mass media machines. In the work, the so-called zombie media (or, home appliances and industrial products that are no longer used, broken, or protruded in the surge of new tech products) are collected, controlled, and eliminated of their inevitable noise using insulation devices; and finally, remediated as sound art. The artist hopes for a new experience and sensation amongst the father’s voice, passages from the Bible, and the noise of machines. ...

The artist collected broken, used home appliances, such as refrigerators, washing machines, computers. The disassembled collection and their debris were installed in variations; from a box cases to internal circuits; from the ceiling to the wall. They were also reassembled to produce a unique, liberated sound. These sounds are then collected by four different microphones.
At a very moment where shunning lights, the cut-out pages of the Bible become indecipherable, as the passages on the two sides overlap. These cut-out pages of the Bible may also seem like instructions for a gigantic mechanical device, or assembly instructions. The most important aspect of this work is the transmission of sound. The work was devised in a way that parts of it, such as video, the machine, and the father's voice, transmit alternately, as if their sounds are talking to each other.
On one wall projects a video of a newspaper factory, where the artist’s father works at. The video transmits the noise of factory machines. On the other wall hangs some cut-out pieces of the Bible. In the recording of the father's voice says:

“You can consider newspapers as living things. Paper could be just paper, but is also a living piece of paper, or a living fish. A fish dies only after a while, so need to deliver it while alive. Likewise, you have to deliver newspapers to local branches on time. It's such a sensitive matter. It’s not like you can deliver them at any time. They can only be delivered to subscribers, only when they are delivered to local branches at a desired time, on time. So, be it the newspaper machine or the delivery person, they must become one living being.”

The moment when the noise of mass media/newspapers (perhaps a medium of a most sophisticated language) production overlaps with the father's stuttering, the audience would experience a sensation. 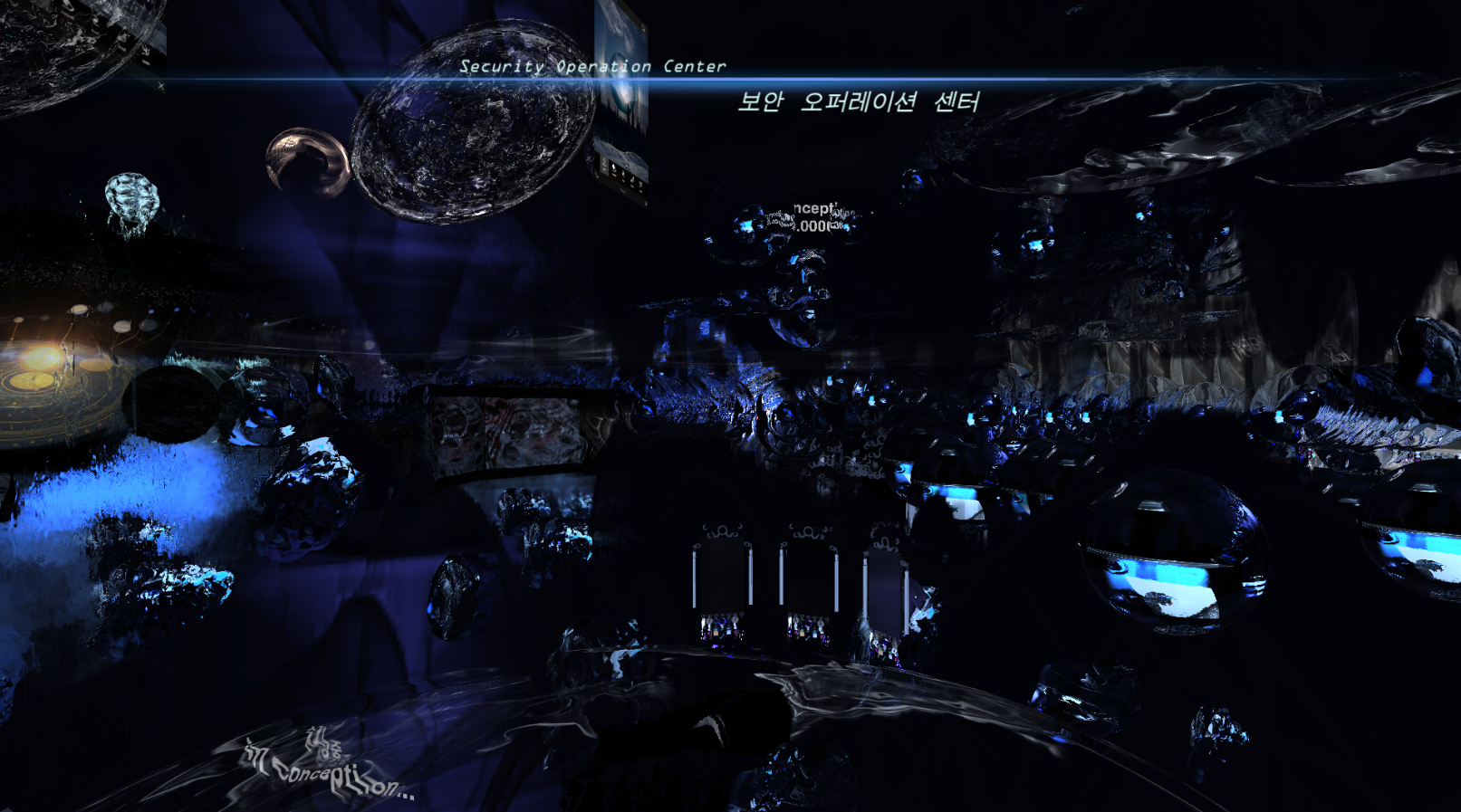 Pondering the notion of “convergence” as a socio-political phenomenon, Inhwa Yeom, a media artist and XR researcher, depicts in Chandra a digital labor landscape in 3D environment. It’s a place and a state, where the boundary between the intention and unintentional visual-cognition is neutralized; where the authorities and powers overlap. The work is also a participatory performance, where audiences are invited to play its performative elements. In their own performance, audiences would also experience a sense of both the connection and connection turbulence. ...
Inhwa Yeom calls <Chandra X>'s medium "3D Performative Apparatus-Environment". The current version of the apparatus-environment is implemented as an "extended reality", where web-based virtual reality and augmented reality are interconnected and interoperates. Audiences can connect and intervene in each other's experiences in real time, across the heterogeneous realities in heterogeneous device network environments; give and receive interaction and feedback on their performative behaviors.

The virtual reality artwork projected on the wall at the entrance of the exhibition hall can be operated with the arrow keyboard and mouse. Chandra X may operate in synchronization with the movement and gaze of those who have already accessed this apparatus-environment. Touching some augmented nova objects on the screen of AR-based assistive devices at the exhibition, the VR projection generates a certain feedback. The AR-based assistive devices function as an “augmented performative apparatus” that lets audiences to connect and intervene in the work.

Crypton(Instagram) is a curatorial collective of Minju Jeong, Inhwa Yeom, and Su Kyung Hwang. Crypton researches on the issues of accessibility in the contemporary art scene, with their own methodology of cross-translating various senses.